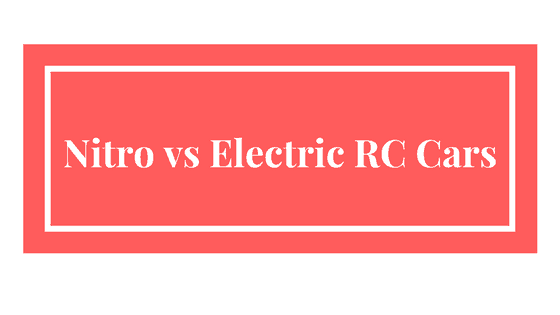 Nitro vs Electric RC cars is a question, which sooner or later confounds most beginner RC hobbyists. Selection of the right vehicle choice usually means the difference between enjoyment and frustration and determines whether your RC flies on tracks or graces the junkyard for eternity.

The choice of the right RC vehicle will depend upon personal preferences, expertise level, speed requirements, track and terrain, neighborhood, size requirements, fuel availability and your level of commitment.

Sounds complex? Do not fear! following article discusses in length Nitro vs Electric RC cars based on engine, power, body, chassis and maintenance.

First and foremost, the drive mechanism that makes your wheels turn is completely different for Electric and Nitro RCs. Nitro RCs utilize a combustible engine just like a real car, whereas Electric RCs rely upon an electric powered motor for driving force.

For most, the actual engine, and the accompanied tinkering are the real charm when using Nitro vehicles. The miniature automobile based engine utilizes compression and expansion cycles to make your vehicle go.

Generally 2-stroke the complete engine consists of the engine itself, exhaust ports, side ports, air filter, carburetor, flywheels, clutches and fuel.
Air from the air filter and fuel from carburetor enter into the combustion chamber.

Crankshafts with connecting rods alternates the piston between compression and ignition, hence the name 2 stroke. As a result of combustion, power is generated and transmitted to the wheels through transmission train. Exhaust ports are used to vent off burnt products.

Instead of combustion, rotational power is generated by using electrical energy. The basic setup consists of a power source such as battery packs, electronic speed controller, motor itself and the transmission. Broadly, Motors are classified into two types, Brushed and Brushless.

Brushed motors are relatively cheaper and consist of brushes that rub against the commutator transferring the power from battery cells to the motor. The motor can only operate at lower RPMs and torque, as a result of friction between brushes and commutator.

This means lower speed and high heat up which are the major drawbacks of brushed motors. Speed can range between 10-20 mph.

These brushed motors come as either Closed End Bell Motor not allowing any maintenance, and Open End Bell Motor which are customizable through brush and windings repair.
On the other hand, brushless motors are a new technology and have completely transformed RC racing.

A brushless motor combined with a LiPo battery can give easy top speeds of 60 mph or more, way more than any Nitro RC. Without brushes, there is no wear and tear, thus these motors operate at very high rpms and voltages, thereby giving significant power boost.

Just like an engine, power sources for both Nitro engine and electric motors are completely different.

Nitro engines require an alcohol based, Nitro methanol fuel. This fuel is a mixture of Castor oil, synthetic oil and Nitro methanol (10-20%). The Nitro air-fuel mixture works just like gasoline does for your real cars. It is expensive and can cost 45$ per gallon while giving a run time of 30 to 45 min. Fuel refilling can be done in a matter of minutes.

LiPo batteries provide serious power at a voltage range of 3.2 V to 4.2 V. Typical run time for a battery is only 10-15 min, so for a long race multiple battery packs are needed. Special chargers will take up to 45 min to charge your battery.

Another difference in Nitro vs Electric RC cars, is the chassis frame. Outward appearance for both car types is same, though touring and on-road cars are usually electric powered. Buggys and trucks for offroad racing can be Nitro powered with a more durable body.

When it comes to internal chassis, Nitro vehicles prefer metallic frames and gear train. Plastic frames are unsuitable as they will melt under severe heating conditions.

Typically Nitro vehicle is mounted on an anodized aluminum chassis frame which acts as heat dissipater. Drive trains are similarly made of metal to avoid melting.

The initial cost for either Nitro or Electric RC will vary depending on the model. Nitro RCs come at a lower Ready-To-Run cost as compared to Electric RCs and provide greater speed. However, with performance upgrades an Electric RC will either come equal to or outclass a Nitro one.

Maintenance is much easier for Electric RC. They are plug and play based, and can be started with the press of a single button. Battery installation and after race maintenance is simple and most of them come as waterproof versions.

It is a completely different story for Nitro RCs as they require engine breaking in and continuous maintenance. A typical RC would require you to clean air filter, apply after-burn oil and careful washing of parts to prevent dust. It may take up to 2 hours just to get your vehicle ready for a race.

Nitro vs Electric RC cars debate can go on forever as both have their own strengths and weaknesses. For beginners, however, Electric RCs are recommended as they are simply easier to use. Nitro RCs can be fun if you love mechanical parts tinkering. On pure speed basis, Electric RCs are definitely faster than Nitro.