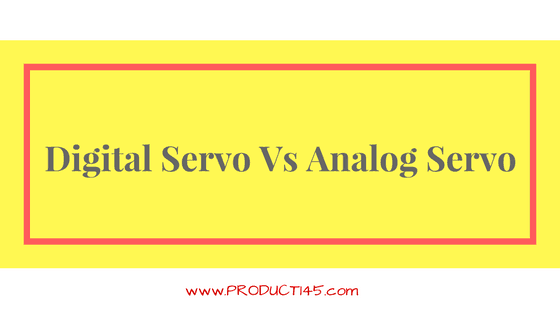 Ahhh the age old question -Digital Servo Vs Analog Servo ?!  if you’re a newbie, lets start with the basics.

Whether you are racing on-road or off-road, driving a truck, buggy or a car, flying a helicopter or a plane; all of them have one thing in common, Servos.

Servos are the primary devices that make your car steer and provide throttle control.

Your car’s handling, output performance, acceleration and braking all depend on this tiny device.

What is a Servo?

A servo converts the electrical energy received from the transmitter into rotational motion which in turn is used to control the handling and speed control of your car.

A typical servo consists of a controller, potentiometer, motor, gear box, and output drive shaft. They come as rectangular boxes usually, with output shaft at one end and three DC wire connector at other end.

Two of them are for power and ground, while the third is for signals receiver. It normally operates between 4.8 to 6 volts.

How Does A Servo Work in RC Cars?

As you press switch or move a stick on your transmitter to steer your car, it sends an electrical signal to your car. This signal gets decoded and the voltage pulses are transferred to servo.

The servo motor has a potentiometer which compares two voltages, the reference voltage asked by transmitter and the servo’s current voltage.

The motor rotates according to the signal requirements and this rotation motion causes the output drive shaft to rotate in either direction by the required degrees.

The rotation or linear motion of drive shaft continues until both voltages become equal. As the drive shaft moves, the car’s connected wheels turn and thus you simply steer your car.

Servos can be classified according to function, signal processing, rotation, and motor.

As mentioned earlier there are two types of servos based on function steering and throttle.

Steering has already been explained earlier.

For throttle servo coming back to neutral position is very important.

It must have enough holding power or torque to keep the brakes engaged.

Based on Friction Reducers:

On this basis servos can be typically classified into two, bushing and ball bearing:

Bushing Type: A bushing is provided for the output shaft, there are chances of greater frictional wear and tear and bush may get damaged much sooner.

Ball Bearing Type: Here bushing gets replaced by either one or two ball bearings. These provide smaller contact area and thus less wear and tear. Even though they are expensive, they can easily sustain increased torque and side loads which occur on the main output shaft.

Based on Servo Motor:

When we talk about motor classification, we have got pole brushed, coreless and brushless RC motors.

Coreless is much better as there is no steel core unlike brushed motor.

What you get is a magnet around which a thin copper wire armature rotates.

Due to less mass, much greater torque is produced. Acceleration and deceleration also occurs faster.

A brushless motor is without brushes and therefore there is less wear and tear and much improved efficiency.

Based on Signal Processing, Digital vs Analog Servo

This is the major crux of our discussion. Fundamentally both servos are same in terms of motor, potentiometer, drive shaft and casing. Difference lies in the way signal gets processed.

Analog servos operate by receiving subsequent on and off voltage pulses.

Typically they receive 50 pulses per second, the voltage pulses (4.8 to 6 volts) cause the motor to turn and torque gets produced.

As rule of thumb, the longer duration voltage pulses give motor more incentive to turn and thus translate to higher torques and speed.

That can happen for slight stick/switch movement of your transmitter or when small external forces get applied on the potentiometer.

These external forces can be from vibration or jarring for off-road vehicles, gyroscope centralization commands.

Especially in RC helicopters and planes shorter pulses are given for vehicle control.

Since analog motors lack the ability to produce torque for short pulses, this decreases their sensitivity and they are unable to respond to slight variations.

This inability is referred to as deadband voltage range which is greater for analog servos.

As a result you get slow laggy responses, and shaky control.

To solve this problem, we have Digital servos. These have special microprocessor chips which can deliver high peak pulses up to 400 times per second.

This high frequency gives motor more incentive to turn, and allows it to respond to very slight stick movements or application of external forces.

You basically turn easily, accelerate and decelerate faster, and have much better control on your RC. It just feels like an extension of your arm.

When comparing Digital vs Analog servo, another benefit for digital is their programmable ability. A digital servo can be pre-programmed for deadband and peak voltages thus optimizing servo performance.

It is time to conclude our digital vs analog servo debate.

Unless you are low on budget, a digital servo upgrade is definitely a better option.

They are so much easier, convenient and mesh well with all modern motors and digital systems.

If you want a smooth racing experience then you should definitely embrace the digital age of RC vehicles.