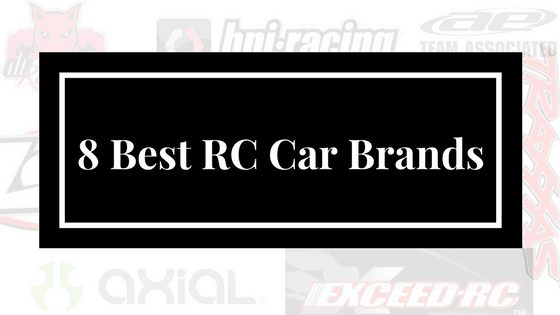 Most RC hobbyist will recognize almost all of the RC car brands listed below, there are many different companies that produce awesome RC kits.

However we are only focused on Ready-to-run RC vehicles.if  you are new to the RC game then here are our recommendations for 10 best RC  car companies that produce the best R-T-R RC vehicles. They are, in no particular order.

It is a British company that has been “Creating fun since 1986”. Producing variety RC cars, trucks and  airplanes.

Established in 1986,this year 2017, the company will be celebrating 31 years of successful business. Apart from the world class real life replicas, especially with best RC drift cars and one of their strong areas of expertise are the revolutionized accessories that they create.

These accessories are used by other companies, which eventually helps them to win championships. Their first car kit design was the Super F1 but since that time, a lot of cool changes were made and that leads us to the latest one that everyone is talking about- HPI Venture FJ. If you’re interested in checking out HPI products and accessories click below.

A family owned company by Gil Losi Sr. AndLosi Jr. Even though they started making pinions and spurs gears, they also helped design Kits such as RCI and RIOL Kits.

After their collaboration with the team associated and Yokomo came to a sad close, they went on producing their own Kits.Team Losi struggled to get their company’s name on the market while finance was an issue often time.

One of their first designs was the JRX2 with the privilege of having parts that are usually custom made.This customization and wide selections of parts and accessories is how Losi bounced back and won hearts of avid hobbyists. Today, people associate Losi with quality parts and customization of their RC kits.One of their famous models is Vorza Flux buggy.

Based in McKinney Texas, United States,.Jim Jenkins and David Katz started operation of the company Traxxas in 1989. The Hobby-Grad RC package with a fully assembled RC was what brought this company on the road to success.

Their package deals were known as the RTR (Ready to Run). They manufacture both Nitro and a full line of accessories.

Traxxas put their name on the market with their out of the box inventive thinking. From one of the fastest (top speed 100 mph) RTR’s  model XO-1 to revolutionary Truck Slash 4×4 or bandit. This helped them to become famous and the best seller in their ready to race vehicles.

Since they opened their doors in October 2005, they have made it their aim to be a company for the people. With they’re fully assembled ready to use vehicles, ranging from 1/24 scale to 1/5 scale.

Redcat has surely made their place in the RC world making them “affordable, fast and fun”. The company has become most famous for this affordable RTR Remote controlled vehicles, which work with either Gas or Nitro.

They produce Cars, Buggies, Trucks and Parts. Anyone can purchase these in either 1/5, 1/6, 1/10 or 1/16 scale.Recently, available is the Redcats Carbon 210 Race Drone.Definitely, an economical option for beginners.

Before being known as a team associated, they were known as Electronics Incorporated. Since 1964,

when Team Associated was established, they were one of the top companies that produce quality radio controlled Cars, Trucks, and accessories.

Ownership of the company was changed from Roger Curtis (Founder) to Thunder Tiger in 2005.

Team associated became loved by many, even today after their creative thinking in the production of the RC10.

From hobbyists to competitive racers, they grab and collect these cars for their high quality and durable designs.

Axial doesn’t go as far back in the 60’s, 70’s and 80’s as some other companies but they are also dedicated to the sport and developing products that will make it more enjoyable.

A group of specialist from different areas comes together to make up the Axial Team. They have top designers with executives and marketing managers who knows very well what people ask for and what is trending in the RC world.

Although they became famous for their high-quality chassis and accessories, they also produce off-road vehicles such as the Electric SCX10, Jeep wrangler scaling at 1/10th and the Electric Yeti XL Monster Buggy.

What helped the Axial Team to stay on top of their game and competitiveness, is their often involvement in local and national events, also, partnering with other top brands.

From wooden models to high-end scale Trucks, Cars, Boats, and Airplanes, Tamiya company Ltd has come a long way since it started in 1946.

cars, Batteries and Solar powered educational models and Sailboats models along with modeling tools and supplies.

Tamiya incorporated is based in Shizuoka, Japan. However, they have branches in America, Hong Kong, Europe and the Philippines (over half of their products are manufactured).

Although they are the pioneers in the RC field, they did take a dip in sales. But they bounced back with the invention of the Japanese Battleship Yamato and 1:35 scale motorized model of the Panther Tank.

Are well known for their scale 1:10 RC Infinitive Nitro Trucks. They also produce other trucks like the Terrain 10, 1/8 Mad Code and the Rally Monster.

Along with trucks, they have a wide selection of Race Cars,Drift cars, Buggies and Gas Boat. The Exceed Team are all dedicated to providing quality products at affordable prices.

They have plans in place when shopping online for people to feel comfortable when taking the risk. We all know sometimes it’s a risk to get what we paid for online.

One such policy is them accepting returns. However, there will be a 15% restocking fee and package must come with its slip, manual, accessories and all other items that were originally packaged.