Radio Controlled fun began way back in the 1940’s and even much earlier. Surprised?

To your amazement there are tons of things coming ahead so follow the history of RC cars article carefully. Lets take a fun tour through the history of radio controlled era.

Though it started in 1940 and around 1936 the Model Car Racing Associations had already been formed before racing cars attained the speed of 60 mph but early commercial products started in late 1960.

Finally commercially viable cars were seen in the market by mid 1966.

Let’s make it easier by telling you that in the era of 60s radio controlled cars first hit the UK but it wasn’t until 1970 when small companies like Scorpions and Tauras delta started to produce RC cars and introduced them in United States.

This article will cover the important events and milestones in the history of RC cars. 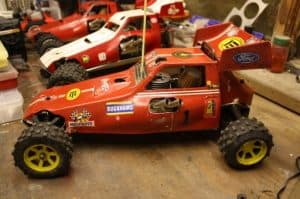 Many other manufacturing companies like WEN and Model car enterprises also jumped in the market with their RC car kits.

In the manufacturing of those cars two stoke model airplane engines were used to power it up.

From this era FERRARI p4 introduced by Elettronica Giocattoli amazed the hobbyists and is valuable gem to the collectors to this day.

It’s the era of electric, nitro and off road cars. Companies like Heathkit marketed electronic components and RC car kits. Let’s discuss the journey and walk through important years.

1971: On road pan car emerged. It was a 1/8 scale RC car and was nitro powered. It was the invention of Team Associated

1978 : 1/12 scale electric pan car. Known as RC12E was released by the Team Associated. Kindly note that this company was then known as Associated Electrics.

1979: Japanese firm Tamiya made hobbyists happy and excited by introducing buggy cars /off road called as Rough Rider. Also they released sand Scorcher along with off road electric kits. The noteworthy quality of these models was the use of real suspension systems, textured beautiful rubber tires, more powerful motors. Moreover the previous models were only for smooth roads but this time these cars can be driven on rough terrains.

The Gloden Era: The same year 1979 also is known as RC Golden era because at the club level and even at bigger levels off road electric racing was huge. This off road era was very popular as Tamiya frog and Hornet were known or heard by almost everyone. This golden era lasted until the early 80s. Another important event during this golden era is the 1/18 scale Championship in Geneva. This was won by the famous company known as Phil Booth

Another milestone is the introduction of high performance models in the history of RC cars. The popularity of RC models skyrocketed in 80s.

1984: The most significant year was 1984 when Team Associated, released a specifically built electric buggy RC10 with entire focus on high performance.

1985: Arrival of a new company in RC cars was Novak and they released NESC-1, the first RC cars with electronic speed control.

1985: In Pomona, Electric Off-road World Championship took place with the first 1/10 scale IFMAR, This set the era for electric off-road segment of popularracing .

1985: First magazine and the first issue of RC car action was released and It became popular very fast and is still considered to be the best selling RC magazine throughout the world.

1986: Monster truck that was the original Blackfoot was released by Tamiya and was considered the most popular basher in Radio controlled.

1988: JRX2. Released by Losi kicked off RC10 made by Team Associated . that was a clear shift as RC 10 was considered the greatest RC racing rivalry in the same year the RC got major exposure due to a film named “The Dead Pool”.

The Pan Car Era: During this era U.S. Large oval races along with speed runs were huge and regularly took place.

Super speedway, which was totally new kind of racing was born in 90 era. Tamiya, Corally, Team Associated, Serpent, and many other companies offered touring cars during this period.

1993: Simultaneously 3 popular models were being introduced by Team Associated during this year known as RC10LSO, RC12LS and RC10LS.

1998: HPI again came in the market with RS4. They started the trend of minis and micros.

1999: Nitro-powered T-Maxx introduced by Traxxas . It was a ready-to-run and a monster truck . It shifts the trend from kits to ready-to-runs. Hobbyist now started nitro instead of electric.

2001: Losi took over by a major online retailer named as Horizon Hobby

2005: Another popular company Team Associated was purchased by Thunder Tiger released radio system with 2.4GHz. This was a prominent switch from AM to FM.

2007: Scorpion rock crawler kit AX10 by Axial made it easy for everyone to prepare a rock crawling ready vehicle.

For the next decade some of the most fun RC RTR were introduced into the market by companies like Traxxas,Redcat,Team Losi,Team Associate,HPI racing etc.But only handful of them stand out and have shattered records and permanently resided in our RC hobbyists hearts.

They are Traxxas XO-1 and X-Maxx models.

Short Course Era: The hobby of RC cars fully bloomed with short course trucks because it looked like the full size trucks for race,. These models resembled in functions and look of real racing big trucks.

The recent innovation is the invention of H-Cell 2.0,where hydrogen fuel cell hybrid was designed to power up RC models of high grades.

RC fans can expect better models with better performance with these amazing new advancements in the field of technology.

It’s true that hype is not as it during the era of 70s and 80s. But the RC lovers are still loyal fans.

Most of the RC hobbyists still collecting every newly released cars and vintage models.

If we cannot predict future but still RC cars passion is not going to die soon.

So be optimistic and enjoy this fun as every hobby and passion brings happiness and life should be full of happiness.